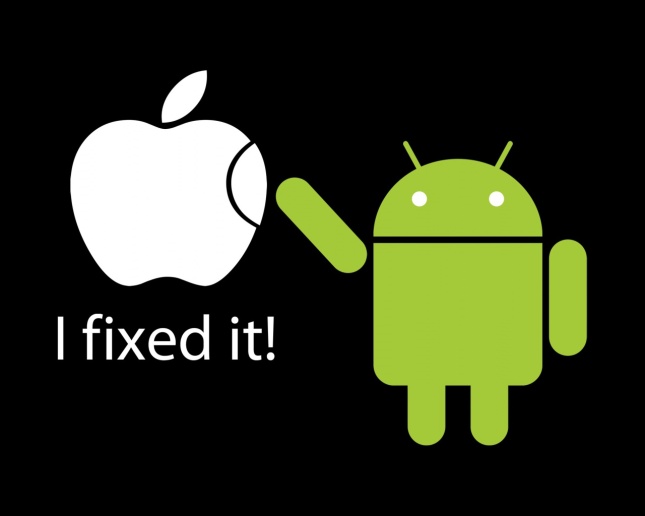 This isn’t my usual type of post, but after having this debate so many times with friends and family, I felt it necessary to lay out my thoughts about the topic.  🙂

One may look at me now and think that I am completely biased when speaking on this topic.  I currently use a Macbook, I have an iPad, an iPhone 5s, and I use my iPod classic when I’m working out, I use Apple TV, connect my devices through an Apple Airport Extreme, and I locally backup my devices via my Apple Time Capsule… Even listing these outright made me shudder at the likelihood that I’ve become an Apple fangirl.  But it has not always been this way.  In fact, I had been ANTI Apple for, well a long time.  I also have to qualify that I worked at a major electronics retailer for 14 years and was exposed to all different devices (all at discounts so I got to choose what worked best for me).

So what made me jump into the Appley Goodness?

The initial appeal to Apple actually was something more practical — the battery life on early Android devices left me wishing for the simplicity of a flip phone again.  I mean, what was the point of having a sophisticated smart phone, if it was DEAD by noon? I’m not saying that the battery life on the early iPhone was the best either, but from my own experience it was far better than my experience with my first Android device.  Once smartphones had completely taken over the market and there was representation across all platforms, I was able to make an even better comparison. Here are some things that KEPT Apple as my primary device (for most of my career I had two devices, a work and personal phone — typically one was Apple and one Android):

1) Con (Android) Slow to Update — The issue with Android is that there are HUNDREDS, if not thousands of different Android devices out there that all need to be considered before updates happen, and they all depend on both the manufacturer and carrier to get their heads together.  Essentially there are too many hands in the pots and I got tired of waking up and checking my phone for critical and awesome updates to software… only to find it either was postponed or cancelled altogether.  With Apple, the hardware and the software comes from one place and once an update is announced, I have it available to my phone within the week.

2) Con (Apple) App Restraints — Apple has gripes about paying for things in an app that’s not charged through iTunes, so a few of my favorite apps, I have to go through extra steps to pay for something, which is a pain.  Although I’ve heard that Android has been having some hiccups in this arena as well.  There were also some features on some apps that were available on Android but not on Apple, although that can be said the other way around as well.

3) Con (Apple) DMR — Apple has it’s hands wrapped tightly around copy rights and you have to essentially buy everything you listen to.  Although applications like Spotify and Pandora and even iTunes Music make this less of an issue these days.  However, I do miss assigning any song in my library as a ringtone (like you can on Android).  Android is more open platform, so I was able to download music for free through some applications.

4) Con (Android) App Exclusivity — Yes! Android HAS come to market with a ton of apps and has a robust market place now.  However, there are STILL companies that only release Apple applications and specialized devices that are only available for iDevices.  Why?  Because of the issue that I mentioned earlier.  There are HUNDREDS of different devices for Android, different hardware, software versions, different specs, different screen aspect ratios.  From a programmer’s point of view, even though Apple sends developers through more hoops and circles to develop an app for them, in the long run it’s more simple because of the standardization of their iOS.  The same entity makes the devices and makes the software… So, even though more times than not Apple and Android versions of apps are released simultaneously, there are considerable times when they aren’t (at least in my experience and for apps that benefit me).

My iPhone 3Gs was my Apple Gateway Drug…

After taking a zillion pictures with my iPhone 3gs and having far better battery life, and syncing it happily with my iTunes account (on my then windows laptop), I was happy and content.  There wasn’t anything spectacular about my phone.  But that was just it. There were no gripes, no “I wish this, I wish that”.  It worked for my purposes and I was happily content with it.  I didn’t go and buy everything Apple I could find at this point, but gradually over the years once something died (like my router), I started to consider buying an Apple device as a replacement.

Apple isn’t for everyone…

I’ve said all of this in order to address my preferences, but one thing I learned while interacting with customers day in and day out, is that everyone is different.  There are people that will be Android forever and people that will be Apple forever.  Even now, I still have some Android devices that truly amaze me such as the Samsung Note Tablet — awesomeness personified.  Some of the things that are cons to me may be pros to other people.  Therefore I have not fixed the debate but happily perpetuated it 🙂

The important thing is that everyone should choose for themselves what works for them.

Musings of a Female Game Developer

Thinking the lived experience of technology

Life Out of the Box
Chris Pinnock
Swiftly Coding

Join me on my learning to code adventures!

Because every game should go viral

museum of vids & links, no reviews, no snark

Helping You & Your Business Grow

T. Brooks Web Design, LLC designs hand-coded, quality websites and mobile sites for all companies in any industry, anywhere in the U.S. We specialize in small, medium, and startup businesses, especially in construction and landscaping. We also handle online marketing and promotion, social media, search engine optimization (SEO), logos, flyers, and videos. All work is done full-time by the owner, and we do not use subcontractors. We believe in fair and ethical business practices, we are proactive and take pride in our work, and we won't drop the ball! Visit our website at http://www.tbrookswebdesign.com.